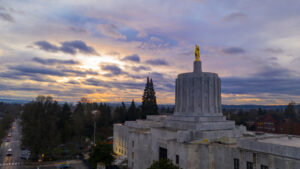 The State Public Policy Committee is preparing for the upcoming legislative session and attended Legislative Day Committee Meetings in early December as a precursor to the formal opening of the 2023 Legislative Session in late January or early February.

The committee is looking for possible legislation that addresses our mission of gender equity and identifying specific legislators and organizations that support the legislation.

The areas of interest include housing, education, early childhood and childcare, healthcare, and age discrimination.

An age discrimination bill (LC 2503) is moving forward and does five things:

Given that a bill like this was approved by the committee in the last session, we will support the bill and the organization POWER (Protect Older Workers Employment Rights) to advance the bill.

The committee expects to identify other legislation as bills start to emerge.

The committee urges all AAUW branches and members to familiarize themselves with their local legislators elected to office in the November mid-term election. Some areas have new representatives due to redistricting. We will send out a link to all members with access to their updated legislator contact information in January.

Contacts Around the State